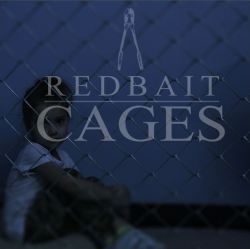 The debut released from Redbait, Red Tape, was a riotous rush of crust punk, full of anti-patriarchial, anti-capitalist fury. New EP Cages keeps the energy high and politics front-and-centre, but with some shifts that help the band stand out from the pack. There’s a melodic thread throughout the EP that owes more to modern hardcore bands like Svalbard than anything clasically crust, and it helps mark the band out as one of the more forward-thinking acts within the genre, whilst the title track is pure power-violence. There’s no loss of lyrical fury either, with songs like ‘Bred for the Knife’ and ‘Capital Gains’ questioning the foundations of so much in modern society, be it capitalist systems, the commodification of animals, and the racism that runs through government structures. Cages is a righteous blast of anger that packs in so much, both lyrically and musically, that it’s hard to believe it’s only 13 minutes long, and demonstrates that they’re one of the most exciting crust/hardcore bands around today.

Cages is due for release on 14th June 2019, and can be pre-ordered on vinyl via New Age Records and digitally via Bandcamp.

Under a Full Moon – Our Riches 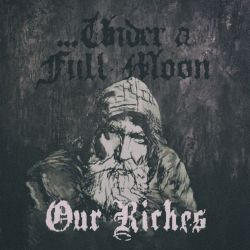 Under a Full Moon seemingly have a work ethic that’s every bit as intense as their music is slow. Since forming in 2016 (originally under the name Disrhythmia), the band have recorded ten releases – with Our Riches being their sixth album in that space of time. Founding member EB also plays in a host of bands, including Neckbeard Deathcamp, but that’s no indication of Under a Full Moon’s sound. Our Riches is the sound of oppression via funeral doom; glacial tempos pressing down with endless weight, trapping the listener in a nightmare. That’s a fitting feeling, as Our Riches is an album built upon anti-capitalist themes, with the album expressing dismay at how capitalism has infected every aspect of modern society. It is also so very, very slow; really, this album is an example of how funeral and drone doom can merge into one. It’s all about the oh-so very heavy atmosphere, and if it manages to ensnare you, then you’ll be stuck for the duration; but if not, then it’s a tough sell. Such is the nature of this kind of music, though, but when it hits, it hits hard. 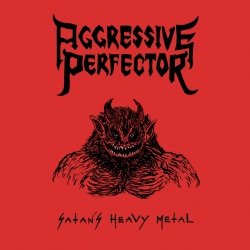 OK, want some more? Aggressive Perfector is a three-piece made up of members of Wode, but whereas that band are establishing themselves as a core part of the UK black metal scene, this demo (now re-released by Dying Victims Productions with a bonus track) is  speed/thrash metal. This could easily have been a lost relic from the 80’s, unearthed now and given a decent re-mastering job; but rather than sounding derivative, Satan’s Heavy Metal is a reminder of all that is great about thrash. It’s a total rush of speed and energy, fueled by equal parts enthusiasm and raw talent, made by a band who clearly love the old masters but aren’t beholden to them. This is very exciting, and I can’t wait until the full-length is released later in the year.

Before we go too far, can we take a moment to appreciate the gorgeous artwork? Seriously, take a moment, open it up in a new tab, and drink it in. Done? OK.

The second album from modern classical duo Kamancello, II: Voyage is a stirring, string-driven piece of beauty, mixing Persian and Western styles and melodies with great effect. There is a sense of drama and motion throughout, from the optimism of opening track ‘Emergent’; to the slower, more sorrowful, almost elegiac fifteen minutes of ‘Tenebrous’. ‘Voyage’ sounds like just that – a song of exploration, of forward movement and the joy of discovery; whilst closer ‘Threnody’ moves from slow, ominous beginnings to close the album out with a winding, evocative journey. That the album consists of improvised pieces is hugely impressive; there’s nothing in their sound or structure that would initially suggest this. An album for dreaming in the early evening, II: Voyage is one of my favourite albums thus far in the year.

II: Voyage is due for release on 31st May 2019, and can be pre-ordered digitally and on CD via Bandcamp. 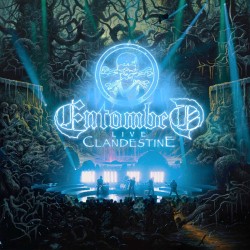 Clandestine is a classic album, and Entombed are, without doubt, one of the most important bands of the genre. But, legal issues over the name and divisions over membership have created a mess of a situation. Recorded in 2016, Clandestine Live feels like part of an attempt by the band to put that mess behind them. Slightly confusingly, this live recording was originally released in 2017 as part of a multi-disc set, including a session recorded with the Malmö Symphony Orchestra. This new reissue is a more straight-forward take on the album though, with no superfluous elements. It’s a fine recording of a fine album, with everything sounding big, strong, and powerful, and vocalist Robert Andersson (of Morbus Chron) does an especially good job. Purists may argue that the closing version of ‘Left Hand Path’ is an unwanted addition, but the rest of us are too busy enjoying some of the finest Swedeath ever written to care about the fact that they’re wrong. That said, I can’t help but worry that the band are relying too heavily on nostalgia, having released no new songs since 2007 – but, on the other hand, the back catalogue they have to pull from is superb, so you can hardly blame them if so.

Live Clandestine is available from Threeman Records on CD and vinyl, including bundle deals.