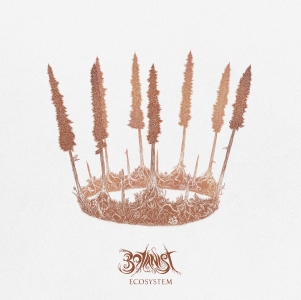 The question of whether Botanist are black metal shouldn’t matter. Their unique take on metal most definitely fits into the “post” part of post-black metal, featuring as it does no guitars and with the distinctive sound of the hammered dulcimer instead taking centre stage. Botanist’s core sound is well established by now, and Ecosystem is unlikely to win over anyone who has previously not enjoyed their music; but it also represents a distinctive growth of Botanist, both sonically and conceptually. Written by the band’s current live line-up rather than solely by main member Otrebor, the sound of the Verdant Realm continues to grow, with Ecosystem presenting a new frontier in the self-styled realm of green metal.

There has always been a melancholy in Botanist’s sound, largely in thanks to the tones of the hammered dulcimer that possess an inherent beauty and sadness; and that aspect very much comes to the fore on Ecosystem. It is more spacious than previous Botanist releases, with a greater use of clean vocals, which gives the album a more overt humanity than most previous records have had. And whilst a sense of righteous fury is never far away, due to the frequent use of shrieked vocals and frequent blast-beats, it is a mournful anger, as if in lament of a world that has been lost or is in the process of simply away. Given the themes of Botanist’s music – nature as a vengeful spirit upon mankind, bringing down humanity so that the world may save itself – this is to be expected, and is a fitting soundtrack for our times, as the Anthropocene era sees humanity slowly strangle itself, and so many innocent species, to death.

All of which could lead to the conclusion that Ecosystem is a difficult record to listen to. It’s certainly true that the hammered dulcimer’s sound is one that, in the wrong mood, will come across as jarring rather than bright and strong, and that the more pastoral elements to the music – especially when the clean vocals come to the fore – can present a challenge. Yet Ecosystem is also an easy record to slip into, when the mood is right. Approached in the right frame of mind, this is an album that will eat up the hours, taking you away to another, better realm, where the poison in the air and corruption in the water can be undone; where global extinction does not seem inevitable for all life on the planet. This sense of contradiction, between a wrathful spirit and beautiful music, is at the heart of Botanist’s sound, and it is as effective as ever on Ecosystem.

It is fitting in a thematic sense that Ecosystem is a further evolution of Botanist’s sound. A band once perceived as a curio has now firmly established itself as one of experimental music’s most reliable acts, regardless of exact sub-genre. Ecosystem feels like the next step along that long journey; one that is tinged with melancholy, but also a sense of renewal and progress, as painful as that can be at times. There is a catharsis to be found in this combination of beauty and hostility that Botanist create, and there is no sign that that will change any time soon.